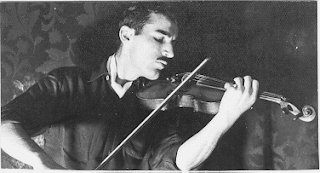 Rabi Nebu Issabey will be honored with the Mesopotamian Achievement Award at our 6th Annual event as “Raab-Musiqooreh (Master of Musicians) for his selfless and unconditional dedication to the advancement of Assyrian classical music. His masterpiece, composed in honor of the Assyrian Patriarch, Mar Benyamin Shimun, will be our feature presentation.

Nebu Juel Issabey, was born in Tabriz, Iran to Harriet and Juel Issabey. Nebu's father was a native of Urmia and a graduate of Sorbonne University in France. But it was Nebu's mother, a graduate of the American College in Tehran, who instilled the first tastes of music in Nebu. At age four, his mother began teaching him the violin and in the next few years he taught himself the piano.

With the foundation set by his mother and his innate talent, Nebu began studying with the great Italian violin virtuoso, Luigi Pazanari, and renowned French violinist, Tina Montofel. After 12 years of studying with Pazanari and Montofel, Nebu made his debut at the age of 26 and gave many violin recitals, playing the works of Beethoven, Brahms, and Sibelius, among many others. It was during this period that he won many highly coveted "Pazanari Prizes."
In 1955, Nebu went to Lausanne, Switzerland to begin his studies in conducting under the great Swiss conductor, Ernest Ansermet. Upon his return to Iran, Nebu organized the first Assyrian choral group in Tehran, Nineveh Choir. Although the group had started at about 30 members, by 1960 the choir had reached nearly 100 members. The Nineveh Choir gave many choral concerts in Abadan, Tehran, and Ahwaz, performing such well-known pieces as Bach's Motet No. 3, Handel's Messiah and Gabriel Foure's Requiem, as well as, Nebu's own nationalistic and romantic works.

It was these aforementioned pieces by western composers that earned Nebu and the Nineveh Choir great recognition by the Iranian Fine Arts Council. In 1966, the Council chose the Nineveh Choir as the leading choral group in the country. Nebu and his choir performed before the Shah of Iran, where Nebu was officially presented to His Majesty.

During the busy but successful years of the Nineveh Choir, Nebu still found time to devote to his nation. In 1961, Nebu organized choirs for both the Assyrian Church of the East and the Assyrian Catholic churches.

In 1967, Nebu returned to Europe and entered the Music Academy of Cologne, Germany for six years. Among his many professors was the well-known modern composer in Northern Europe, Joachim Blume, professor of piano and music theory, and Carl Kaufhold, professor of orchestration. Nebu was also influenced by Carl Orff, the great composer of Carmina Burana, as well as Boris Blacher, professor of modern composition, both at the Berlin Academy.

While in Europe, he performed his own works at the Wallraf-Richartz Museum in Cologne, including modern Assyrian as well as some Iranian music. His works were also performed on German radio and television. During this time, Nebu was known for his use of free dissonance, a combination of tones that create tension and an unforeseeable outcome. In fact, his short compositions for oboe and piano were fine examples of free dissonance and won him a medal by the Cologne Academy of Music.

In 1973, he left Cologne with his wife, Eglantin and daughter, Arbella, and was destined for Chicago, Illinois where he reestablished the Nineveh Choir in the same year with both old and new members. They gave quite a few concerts in various areas of Chicago and performed many of Nebu's pieces, notably, an aria from his opera, Semirames.

A year later, his younger daughter, Nineveh was born and a few years later, Nebu was reunited with his son Tiglat, who made it to the United States after a perilous trip from revolutionary Iran.

Nebu established the Schubert Northside Choir in 1978, which consisted of various neighbors from all walks of life. This choir had become a significant part of the local community of Sauganash in Chicago and was covered in several local papers and newsletters for their successful performances throughout Chicago. It was for his several years of community work and cultural awareness, both for Assyrians and Americans that Nebu was chosen as one of the Twelve Outstanding U.S. Citizens of 1979.

After spreading music in the Assyrian and American cultures of Chicago, he looked for new opportunities to build the awareness of Assyrian and Western classical music. His chance arrived when he and his family moved to California in 1985. During the first few years, Nebu was busy writing new compositions as well as bringing his youngest daughter, Nineveh, to the stage as a concert pianist. In 1987, Nineveh made her debut at the age of 13 with pieces by such composers as Chopin, Bach, Mozart and Schubert. Nebu's oldest daughter, Arbella, having made her debut at the age of 13 in Chicago as a concert blockflutist (recorder), was also giving recitals, many with her sister. Nebu's son Tiglat, a very talented musician, studied briefly with his father and stayed in Chicago to further his studies in music.
In 1995, Nebu was yearning for another choir and reestablished the Nineveh Choir with some old but mostly new members. Their first concert was in 1996 in San Jose and later in Los Angeles. The Nineveh Choir performed several times from 1997 to 2000, singing many of Nebu's works. However, it was Ghoom Ya Jvangha (Rise, O Young Assyrian), Ghooyama (Revolution), and Atouraya Khata (The New Assyrian) that mesmerized devoted listeners.  Further, the choral group was especially acclaimed for their performance of Lacrymosa (Crying), a piece from Nebu's requiem.

After a long hiatus, one of Nebu’s dreams came to fruition on a spring evening in 2008: To have a national choir that truly portrays the essence of our people; to have individuals from all walks of life, an array of age ranges, and various backgrounds; to have as many voices as possible.

Nebu had gathered members not only from San Jose but also from Los Angeles, Modesto, and Turlock. Old members and brand new members came together, this time on a grander scale. It was a year of very hard work from the director and the singers to bring to the Assyrian nation Nebu’s last concert. Traveling among these cities on an ongoing basis for a year, Nebu had claimed his dream. The Nineveh Choir had at long last evolved into the Assyrian National Choir, a body of nearly 50 amateur singers with a passion for their nation, as well as a passion for Nebu’s stirring music.

In recent years, Nebu had another dream: To have his composition, Roomraamaa, be recognized as the Assyrian National Anthem, unifying all Assyrians around the globe. You will be hearing the anthem tonight with a new arrangement by his son, Tiglat. It is a passionate piece of music that truly exemplifies the love the composer has for his people.

Nebu has always taken great pride in the abundant talent that abides in the Assyrian nation. His efforts over the past decades have had one goal in common: to promote our nation’s culture through the international language of music. 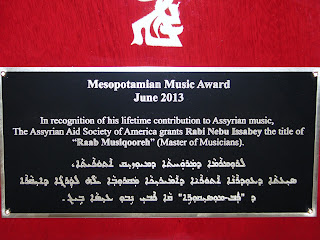 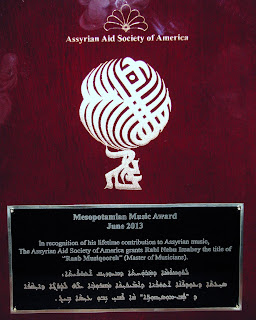