AASA-LA Chapter has created a beautiful calendar for 2010. You can order your copy from us online on this website.

Mother Teresa was once quoted as saying" If you can't feed 100 people, then feed just one". Can you find it in your heart to help just one person?

AAS has printed a beautiful calendar with the pictures of our children in Atra, for the year 2010. The price of a Calendar is only $10.

Below are a few samples of the months of our calendar. We would like to see this calendar and its message in the homes of every Assyrian/Chaldean/Syriac around the world. 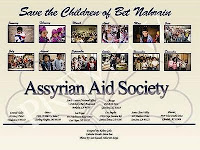 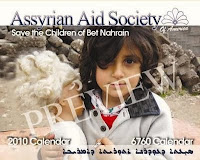 Email ThisBlogThis!Share to TwitterShare to FacebookShare to Pinterest
Labels: SHOP

Our video crew at MJC film department has given us a slightly modified version of "Assyryt: The Assyrian Diamond" DVD. This trailer now includes a scene from the Mesopotamian Choir Ensemble".

Email ThisBlogThis!Share to TwitterShare to FacebookShare to Pinterest
Labels: Media and Videos, MN2009

A Sample from Qateeni Opera

Michel Bosc the composer of the Qateeni Opera has created the following sample from the recorded performances at the Mesopotamian Night 2009. The CD and DVD of this historic event will soon be available.

Email ThisBlogThis!Share to TwitterShare to FacebookShare to Pinterest
Labels: Media and Videos, MN2009

It is a pleasure to announce to the Assyrian community and all enthusiasts of Assyrian music and culture that the DVD/CD product from the Mesopotamian Night 2009 concert fundraiser is almost ready. In the meantime enjoy the following trailer for the DVD. The details will be announced later. The DVD is named "Assyryt: The Assyrian Diamond" in honor of late Rabi Paulos Khofri and his beautiful music suite "Assyryt" which was composed in 1984 in Tehran.