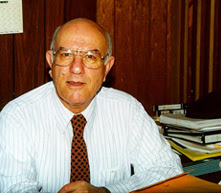 Edited by Helen Talia
Homer Ashurian was born and raised in Urmia, Iran. He graduated with a Master Degree in Archeology, majoring in Assyriology from the University of Tehran. In 1958, he served as the Curator for Iranian Cultural Museum. From 1963, for several years thereafter, he served as the Principal of two High Schools in Tehran. He was a member of a five-dignitary committee who established the Assyrian Universal Alliance ("AUA") in 1968 in France.
During the 1970's, he served as editor of two illustrious Assyrian magazines, titled Kirkha (The Scroll) and Shvila (The Way), both published in Tehran, Iran.
In 1975, Homer Ashurian was elected as a Congressman to the Iranian Parliament to represent his Assyrian nation, until the Islamic Revolution in 1979.
In 1984, Homer Ashurian migrated to the United States, domiciling in Chicago with his two sons.
Shortly thereafter in 1987, he joined the Board of Directors of the Assyrian Universal Alliance Foundation (“AUAF”), where he is now the Chief Executive Officer of this organization.

The AUAF serves thousands of elderly people in Chicago and surrounding suburbs. It also houses the Ashurbanipal library, where research material in the Assyrian culture and heritage is widely available.  In addition, this organization has helped promote cultural and educational programs in the Chicagoland area; it has allocated and funded hundreds of thousands of dollars in scholarship funds to post High School students.
Internationally, Homer Ashurian has advocated the importance of Assyrian education in motherland Iraq, and has, in turn, helped award the Assyrian Aid Society with two major grants from AUAF for the printing of Assyrian textbooks.  And most recently, he helped secure a grant to help fund the Mesopotamian Night project.

The Mesopotamian Night is honored and privileged to welcome Rabi Homer Ashurian as its special guest from Chicago. 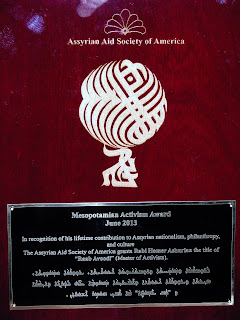 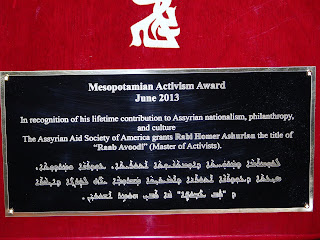