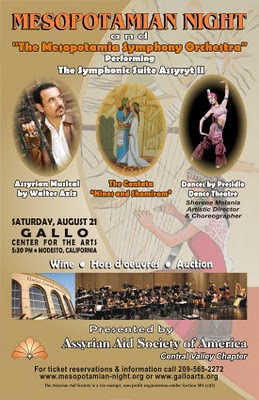 Obelit Yadgar has been called the intellectual force behind our Mesopotamian Night project. Read here his insightful new article about this year's Mesopotamian Night musical production.
To say Walter Aziz could sing before he could walk is a safe bet. A safer bet yet is to say he was born with a loving song in his whistle — for his nation. Either way, this consummate pop singer has been on a musical journey for Assyria much of his life, entertaining live audiences around the world and recording one hit after another.

The Assyrian Aid Society of America (AAS-A) presents this fourth annual Mesopotamian Night gala performance and fundraising event August 21 at the Gallo Center for the Arts in Modesto, California. As in previous productions, the evening splits between classical and popular Assyrian music to entertain every taste.

The show’s first half offers a feast of Assyrian classical music that includes Assyryt Suite No. 2, an orchestral arrangement by the French composer Michel Bosc of solo piano pieces by the late Assyrian composer Paulus Khofri.

Using the poetic setting by Yosip Bet Yosip, Bosc takes off in a different direction with the cantata Ninos and Shamiran. The cantata, for coloratura soprano, tenor and orchestra, paints a portrait of tender love between the Assyrian nobleman Ninos and the beautiful shepherdess Shamiram.

George Somi’s lush orchestral suite The Assyrian Legacy and Sam Madoo’s arrangement of William Daniel’s music for string quartet round out the exciting first half of the program.

Following a big auction of Assyrian art by artists such as Paul Batou, Odette Tomik and other renowned Assyrians, Aziz and company take over the Mesopotamian Night stage in the second half with an exciting fare of Assyrian pop songs spiced up with ballet and dance in a riot of colorful costumes. “You’re in for a dazzling show of Assyrian popular music with Walter Aziz as never before experienced,” promises Tony Khoshaba, AAS-A Central Valley president and Mesopotamian Night producer.

That all proceeds are destined to brighten the lives of Assyrians suffering a storm of tragedies in their homeland of Iraq makes the Mesopotamian Night gala production a must for Assyrians everywhere. Please join us, not only for the privilege of helping Assyrians in need but also for the experience of a memorable evening of music and dance emblazoned with Assyria’s proud signature. This is the dazzling portrait of Assyrian arts and culture blossoming in creative hands.

With 10 songs, arranged and orchestrated by Edwin Elieh (no relation to Fred Elieh), Aziz sweeps across a musical spectrum of his big hits and lesser-known works. Dashta d’ Nineveh Deyan Eala (Nineveh Plain is Ours), Malikta d’ Khayee (Queen of My Life) and Atour Bet Khayah (Assyria Shall Live), among others, are sure to be crowd pleasers. Aziz also throws in two songs from his new CD, Assyrian Hope, due for release on the day of the concert.

Much credit for the second half of the show’s Broadway musical air goes to Elieh’s arrangement and orchestration of the Aziz songs. Unlike Broadway musicals, however, starting with Oklahoma, the 1936 hit by Richard Rodgers and Oscar Hammerstein II in which each song carried the storyline forward, the Mesopotamian Night Assyrian pop musical revue is without a specific storyline.

“Each individual song has its own story,” explains Elieh, “but there’s no continuous story from one song to the next. In other words, the songs are not interrelated. They’re like juke box musicals which are based on the songs of one singer.”

Elieh points out that arranging and orchestrating Assyrian traditional and modern songs sometimes proves to be a difficult task. Because many rely on a simple arrangement of a rhythm section with bass and keyboard, the songs are not appropriate for orchestration, he maintains. “If I just orchestrate the song, it won’t be all that different from the original,” he says. “It won’t be good either, because just orchestrating the song will not be enough.”

Elieh draws a fine line between orchestrating a song and arranging it. In essence, he explains, the song must be arranged in such a way so that an orchestra can play it. He keeps the song’s basic structure — rhythm and chord progression — and from there, he not only orchestrates the song but also arranges it for orchestra. That’s what he has done for the Walter Aziz songs in the show. “In the end,” he adds, “what we have is a song orchestrated and arranged for a singer with an orchestra.”

Aziz recalls that when Khoshaba asked him to perform with a symphony orchestra, he, Aziz, wanted to know who would write the scores and the charts. Khoshaba mentioned Elieh, a talented young Assyrian musician and arranger who currently studies film scoring at UCLA. Aziz remembered Elieh from playing the opening acts for some of the Assyrian weddings and parties he headlined.

“I didn’t know he was a musical arranger and that he was learning musical scoring at a university,” Aziz says. “I wanted an Assyrian to do the arranging and orchestrating. That was important to me and it would make me proud to have an Assyrian musician to do the work.”

Aziz says he is pleased with Elieh’s arrangement and orchestration of his songs. He also admits that working with a symphony orchestra is something altogether new for him. “This will be the first time we don’t have drums or a heavy beat,” he notes. “The music is converted to a little classical.”

What also delights Aziz is the added dimension of ballet and dance to his music. He admits that aside from working with a symphony orchestra for the first time, working with dance is another new experience for him.

“It will be a fun show, because people will have so many things to see and so many different ways to relate to the performance,” says Melania. “This will be an unusual performance. There are Assyrian groups that focus on the dancing, but there aren’t any that mix ballet with traditional Assyrian steps. It’s a new kind of fusion that people will find interesting.”

Melania emphasizes that with the authentic and colorful Assyrian costumes, made by the Mariinsky Theatre in St. Petersburg, Russia, where she studied dance, as well as some made in Turkey, the Presidio Dance Theatre will bring the songs to life and give the audience a visual picture of the music.

What’s more, she points out, this is one of those rarities where the orchestra shares the stage with the singers and the dancers, thus adding a further dimension to the concert. “It’s really a culmination of the performing arts at their finest,” she says.

Melania’s choreography, in addition to that by guest choreographer Ahmet Leleci of the Collage Dance Ensemble, headquartered in both San Francisco and Boston, will frame the Aziz songs in a colorful and brilliant blending of the East and the West.

“It’s going to be a mix of Assyrian folk dance and classical ballet,” she explains. “A couple of the songs will be more just ballet, and some arm movements will be more Assyrian. Each song will require its own distinct choreography. For instance, we use for one of the pieces the sheikhani. Another piece is about a wedding, so we’ll have the bride and groom do a duet based on that.”

With a production worthy of Ashurbanipal’s courtly celebrations, perhaps the Mesopotamian Night pop music review with Walter Aziz will set a trend to create similar Assyrian productions around the world. “Yes, absolutely,” says Aziz. “I hope all Assyrian singers will see this as the first step to enhance and make our music known to the world.”