Hannibal's Ziggurat of Love: The Victory Over Fascism 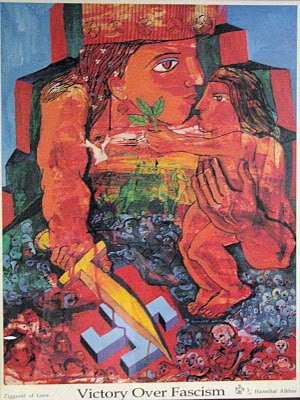 Hannibal Alkhas (b. 1930), Assyrian painter and poet, was born in Kermanshah, Iran into a learned family that produced two cultural pillars of modern Assyrians, his father, writer and publisher Addai, and his uncle Jean (John), one of the famous Assyrian poets of the 20th century. The parents met and married away from their original homes in Urmie due to the genocide against Assyrians in west Azarbaijan and Ottoman Turkey.

Rabi (master, teacher) Hannibal spent his early years in Kermanshah, Ahwaz and Tehran. In 1951, he left for the United States in pursuit of higher education. After first studying philosophy, he earned his BA and MFA from the Art Institute of Chicago. In 1959 he returned to Iran and began teaching at the Tehran School of Fine Arts. During that time he established Gilgamesh Gallery, the first modern art gallery in Iran, where aspiring young artists received recognition. In 1963, he returned to the US and taught at Monticello College and served as chairman of the art department. In 1969 he went back to Iran and settled into teaching at Tehran University for eleven years. Returning once more to the US in 1980, Hannibal spent twelve years teaching the arts at the Assyrian Civic Club of Turlock, private colleges and the UC Berkeley and UCLA.

This multi-talented Assyrian, steeped in his Assyrian and Persian cultural heritage, has been honored often in Iran and by the diaspora Assyrian community, with exhibits and publications of his poetry. He remains a devoted artist whose CD Urmie pays tribute to his family’s roots in the now mostly lost Assyrian village communities of Urmie and Salamas. For inspiration, he draws on the strong tradition of Persian poetry from Khayyam to Nadirpur, Assyrian history from the ancient to the modern periods, and shows agility in bridging the two cultures while making them accessible to the West.

The Ziggurat Series comprises of thirty paintings called Ziggurat of Love (but titled individually) all painted in the same medium and with similar motifs, within a six month period in 1996, while the artist was living in California.

The conceptualization of the series came through a vision when this master painter imagined himself transported to ancient Assyria. There, in Nineveh, he met with court artists of the time to discuss painting a mural much as they created painted reliefs of political history. He agreed to paint a mural for them but with visions of the future.

Within the basic shape of a ziggurat the artist combines stylized ancient motifs with subject matter taken from visual artists since the ancient period. The added complexity comes from the presentation of historical events and other subjects, much as the ancient Assyrian artists applied their talents to the presentation of contemporaneous subjects. Images reminiscent of Rembrandt, El Greco, Frieda Kahlo, Diego Rivera, Van Gogh, and Behzad appear on the wall on which his ancient imagined peers give him space to paint. Only the stone walls of Nineveh’s palaces are no longer available to Assyrians. Instead, Assyrian artists make do with art that is transportable into diaspora.

The Ziggurat series is thus a history of art and a representation of the artist’s own Assyrian heritage, as well as the history of humanity, that have influenced Rabi Hannibal’s own life.

One of the last of four paintings in the Ziggurat series, this powerful painting, full of hope, nonetheless reminds the viewer of the millions lost in World War II to the genocide perpetrated on European Jews, the cruelties of Stalinist revolutionary interpretation, and the perpetuation of wanton misery upon minorities like the Assyrians.

The victorious dagger that breaks the ancient swastika symbol, adopted by Nazi fascism, is attached to a muscular arm that appears to come from a mother tenderly gazing upon her child. The child clutches a triple leafed olive branch of peace, a motif that appears in several of the paintings in the series. The mother’s hat is decorated with traditional Assyrian embroidery design that also cascades down her dark tresses.

The ziggurat in the background has seven levels to fulfill the artist’s vision but is a departure from the three levels of Assyrian ziggurats.

These Victory over Fascism limited edition prints represent hope and love conquering evil. The limited edition prints, in numbers 1-10, is available for purchase to benefit the charitable activities of the Assyrian Aid Society through encouragement of the visual and musical culture of Assyrians. These high quality prints, at the dimension of the original painting, carry the distinctive original squared signature of the painter, an individual number, and are framed.