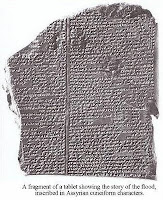 The Sumerian epic of Gilgamesh has been the subject of operas by Bohuslav Martinu, Franco Battiato, Rudolf Brucci, Rosella Simorari, and John Craton, whose version remains a work in progress.

The only one of the operas sung in Aramaic, the language of the Assyrians, is Craton’s, based on the translation of the epic by Addai Alkhas. The Assyrian Aid Society (AAS-A) commissioned the opera.

Excerpts from Gilgamesh were premiered at the 2008 Mesopotamian Nights gala concert, in Modesto, California. This year, at the third annual musical gala, Gilgamesh returns to the stage with the Duet of Gilgamesh and Enkidu, with soloists and the Gottschalk Music Center Orchestra conducted by John Kendal Bailey.

Myths, legends and stories abound about the life and adventures of Gilgamesh, King of Uruk in Babylonia, who lived around 2,700 B.C. Some were written in Sumerian about 2,000 B.C. Others existed in long poem form in Hittite, Hurrian, and in Akkadian, the language the Assyrians generally spoke before switching to Aramaic sometime around 1,000 B.C. The epic was written on clay tablets in cuneiform, an ancient script using wedge-shaped figures.

In time the Sumerian version of Gilgamesh was incorporated into the longer poems. Today some survive to various degrees. The best preserved is a series of 12 tablets written in Akkadian that make up the Epic of Gilgamesh as we know it. The tablets were unearthed in Nineveh, in present-day northern Iraq, in the ruins of the prized library by the Assyrian king Ashurbanipal (669-633 B.C.). The Medians destroyed the magnificent library in 612 B.C. at the fall of the Assyrian empire.

The authors of all versions of Epic of Gilgamesh are unknown, except for that of the 12 tablets, written in Akkadian. He was one Shin-eqi-unninni, now considered history’s first known author. Since its first European translation in 1876, the Epic of Gilgamesh has been offered in scores of languages and appeared in numerous forms, including novels, plays and operas. More than 10 versions of the epic alone have been published in English.

When completed, the chamber opera will be approximately 60 to 70 minutes in length. Since he does not speak Assyrian, Craton uses the English translation of the epic with assistance from Tony Khoshaba of AAS-A. “I had known of the epic since an undergrad and considered it as a possible source for an opera for some time,” explains Craton. “I envision my own version to be something of a synthesis between a cantata and a dramatic work.”

Assyrian history is plum with a treasure of stories and characters to be immortalized in operas. Not just any operas, no, but Assyrian operas, sung in Assyrian. Imagine how richer our nation would be with our own catalogue of great operas. More than our nation, but the world that seems to have a short memory when the name Assyrian is mentioned.

Even though Gilgamesh is only one Assyrian opera, it still is a good start for our nation to once again try to take a bow for the magnificence of its art.
Posted by AASA-MN at 10:39 PM