Emanouel Bet-Younan is our guest Assyrian pop singer at the Mesopotamian Night 2009 concert in Modesto. Below Helen Talia an Assyrian activist and writer from Chicago gives us an interesting account of his life. 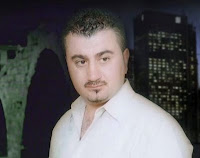 Emanouel Bet-Younan was fourteen years old when he took center stage to sing on an Assyrian television show in Kirkuk, Iraq where he was born and received his education.

A youth then, he formed his first band in 1981 under the name Shamiram and began performing at private Assyrian weddings and parties.

With uncertainties in homeland, Emanouel took refuge in neighboring Iran, but found himself in Greece in less than a year, where he continued to perform at private functions and national holidays ~ Assyrian New Year (Kha B’Neesan, Assyrian), and Assyrian Martyr’s Day (Shawwa B’Tabbakh, Assyrian).

Unsettled, yet focused on his path, Emanouel’s next journey took him to New Zealand, where he lived for five years and scraped all that was left from his past to reestablish himself as an Assyrian artist in Diaspora.

An artist whose work has a strong foundation in the Assyrian political movement and roots in humanitarian projects, his first album, a transparent determination of the survival of his people in Iraq, “Shighda mn Garbya” was produced in 1994 in Sydney, Australia where the artist was living at the time and performing regularly at the Assyrian Culture Club and the Assyrian Nineveh Club.

With the album soaring internationally and the artist enjoying the much-deserved fame, the Assyrian Democratic Movement hosted Emanouel in Chicago where he performed for the first time before a sold-out audience at a charity event.

Following his groundbreaking performance in Chicago, the doors to Emanouel’s musical career quickly began to open. Earning international recognition within the walls of the Assyrian community, he began to tour within the United States, Canada, Europe, and Australia, building an ever tall order of philanthropy for any artist to follow in his footsteps. Emanouel, the first Assyrian artist to lend his voice to thousands of fans in the Nineveh Plain (Dashta D’Nineveh, Assyrian) has helped pave the way for humanitarian missions in homeland Iraq and built charitable alliances by pairing the Assyrian Democratic Movement with the Assyrian Aid Society to help build awareness and raise funds that were desperately needed to build the Assyrian dream in Iraq ~ an education system, its transportation and student housing, day-care centers, orphanages, pharmacies, food and medical supplies, to say the least, throughout cities and villages in the Northern region of Iraq.

With the execution of work in motherland Iraq, the message had clearly been delivered when Emanouel snatched the Assyrian musical charts for the second time with his follow-up album “Agarta Qa Yimma,” produced in 1996 where the artist made Chicago his new home.

In the following years, joined by other singers, Emanouel performed in the Assyrian Song Festival in Chicago for two consecutive years. But even after accomplishing this much success, he continued to live his life in the fast lane, shifting gears between family and career, a humanitarian during the day and an artist by the evening, while making one country after another his home.

Apparently, he needed to settle some old scores with the recording of his third album, “Durara Mzayna.” The success of this album is without a doubt owed to the river-deep, mountain-high voice of the artist himself, but greatly indebted to the contributions of some of the most credible lyricists of modern Assyrian songs ~ Rabi Yousep Bet-Yousep, Ninos Nirari, Jaklin Pityo, Orahim lazar, Wilson Lilu, Yousip Menashi, Sargon Esha, and Macksud Ishaia, and the sounds of Alan George, Dawod Barkho, and Billy Warda.

His second trip to Iraq in 2005 waved sounds of freedom from the East to the West as Emanouel visited motherland Iraq once again to commemorate the Assyrian New Year (Kha B’Neesan, Assyrian). This trip was immediately followed by his Middle-East tour to Syria, Jordan and Iraq where he performed at several concerts to promote the Alrafedaen 740 ballot representing the Assyrian Democratic Movement in Iraq’s National Election.

Earlier this year, Emanouel traveled to Iraq yet again to perform in Baghdad, Baghdeda, and Telesqoph to celebrate the grand opening of Ashur TV satellite and to raise awareness on the importance of participating in the then city elections.

Today, Emanouel is happily settled with his wife Jacklin and daughters Kiana and Shanna in Arizona, and continues on the same path of nationalism and charity that began more than twenty years ago. His fourth album titled “History Repeats Itself” translated (Tasheetan Bitnayela L’Ganoh, Assyrian), is due to be released soon.