One of the main focuses of the Mesopotamian Night concert 2009 is celebrating the music of Rabi Paulos Khofri. He is probably one of the most productive Assyrian composers who took the classical Assyrian folklore music to another level. In Autumn 2008, Ms. Marganita Khofri, Rabi Paulos daughter, generously granted AAS-A Central Valley Chapter the permission to use and arrange Rabi Paulos Khofri's music for performance in our concert. We chose to present Assyryt a 30-piece piano Assyrian classical folklore music (composed in 1984 in Tehran) as the first symphonic suite of our music. In the search for a musician to take on this task and following a recommendation from John Craton, we chose the French composer Michel Bosc. Twenty pieces of Assyryt were arranged by Mr. Bosc for a full orchestra in two 10-set pieces which we named Assyryt No. 1 and Assyryt No. 2. Both of these pieces will be performed by a 50-piece orchestra on August 15. This will be an unprecedented art and musical event in our community, perhaps giving us the momentum to start a new cultural revolution in our Assyrian Nation. 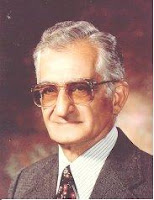 Paulus Khofri was born in Baghdad, Iraq on Aug 7, 1923. His father, Jibrael Khofri, a gifted artisan, who during WWI, when the heavy-duty-truck spare parts were scarce, manufactured them single handedly, punching them with embossed Assyrian characters which he made himself that read "Oomanoota Atoreta".

His mother, Victoria, a good-natured lady tended the family. When Paulus was only five years old, the family returned to Iran and settled in Kermanshah. After graduating from high school, he was employed by the British Bank of Iran. During this time, Paulus performed with his own four-piece band in Kermanshah and continued to play with yet another band. In 1950, when this bank closed in Paulus moved to Abadan and worked for the Anglo Iranian Oil Company.

Khofri's musical career started when he resumed his musical studies with the goal of becoming a composer. In 1964 he earned his diploma in music composition and harmony from the United States School of Music, Port Washington, New York. Mean while, he was busy giving concerts raising money for building the Assyrian School and Club in Abadan. He also gave exhibitions of his Oil and Watercolor paintings. Proceeds from these exhibitions went towards financing the said school building.

After transferring to the Tehran National Iranian Oil Company, Paulus Khofri continued his studies in music and music law. He studied under the direction of some famous scholars like Paul Hindemit of Yale University, Arnold Schonberg and Professor Walter Piston of Harvard University and he finally achieved his goal of obtaining his B.M. degree in Music from the Royal Academy of Music in England.

Paulus stopped giving concerts and painting and resumed composing music, styling and writing musical notation with different nibs, thousands of notes, inserted verses with tiny characters by hand as well as writing the lyrics with grammatical precision as well as Illustration. His musical compositions comprise of three classifications; Vocal Music, Instrumental Music and Orchestral Music.
Posted by AASA-MN at 9:31 PM