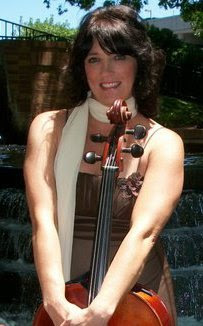 As we prepare for the formation of The Mesopotamia Symphony Orchestra, we would like to introduce our audience to Robin Johnson-Purto who recently contacted our team to volunteer her time as a musician and cellist to Mesopotamian Night project.

In her email she wrote "Being human, is to make a difference in this world where one is able. Whether it be through ones talent, volunteering of a service or a simple donation. It is always done with, love, compassion and within ones means. There are many things that we all take for granted in this world that others do not have such as a simple book to learn from, clothes on our back, shoes to walk in, food on our table, and or a roof over our heads. It brings me great joy when I can contribute talent to a cause where it is needed such as this and hope that my contribution in playing music will open others eyes, ears, and hearts to others in doing the same back."

She had studied and played the cello since the age of 10. She also studied at the University of New Mexico in the Princeton Play week chamber music workshops. During her youth in high school, she was a participant with her symphony for the International Music Festival held in Vienna Austria. This was a special invite for the group to represent the United States. During that time she had the opportunity to play and tour in the great opera hall in Vienna, Frankfurt Germany and Salsburg Germany. She has volunteered frequently during each school year working with beginning, intermediate and advanced cello students at Grant Middle School. In the summer months she also worked with a quartet group of youths bringing music into the local nursing homes. Robin was the founder of a christian music duo, Musical Praises, performing for a wide range of church activities as well as hired events. This also included bringing music into several local Nursing homes in the form of singing, playing guitar and cello. This past summer she played in Land Mark's Production of the “Music Man”. For the past two seasons she also played in the Italian Film Festival gala opening ceremonies. This season the University of New Mexico held a Faure concert fundraiser event for the music department in which Robin also sat principal chair with the orchestra.

On a professional career level, Robin has worked within the health care field for more than 20 years serving within the business accounting departments. She recently was a five year employee for New Mexico Orthopedics Association in Albuquerque, working within the accounts receivable department.

Robin is of Polish and Swedish decent born in West Bend Wisconsin, but raised in Albuquerque New Mexico since age five. She married in 1985 to her husband an Assyrian, who's father migrated to the United States from Baghdad Iraq in the year of 1956. The schools she attended were Eldorado High, Rockland Community College in the state of New York, National Business college in Albuquerque and Central New Mexico Community College. Certificates earned are Deans list, managements skills, Business, accounting, and muscular dystrophy fund raising. In her spare time she enjoys attending cultural events, weight training, running, biking, spending time with her two daughters and son, ages 16, 17 and 20.
Posted by AASA-MN at 11:01 PM