Lorraine Davis this year is joining us to perform two solo songs of William Daniel (String Wheel and Maiden of Dreams). She will also perform in "Mesopotamian Singers Group" a newly formed choir group in San Jose. This group will perform two songs ("Nation Sacrifices" and "Vacant Nineveh") by Rabi Paulus Khofri as well as the song "Nation" by Rabi Nebu Issabey. All these five songs are arranged for full orchestra by John Craton.

Last year Lorraine performance of William Daniel songs as well as her role as Ishtar in Gilgamesh opera scene was a hit among our audience. We look forward to seeing her performance this year as well. 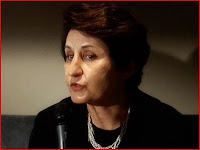 Lorraine Davis was born in Tehran, Iran and graduated as an architect with an M.A. from the Faculty of Fine Arts at the University of Tehran. While at university, she took private singing lessons and performed at the Cultural Youth Institute of Tehran singing different songs from Mozart, Puccini, Schubert and Brahms. Lorraine also studied in London and earned an M.A. in Health Facility Planning. After returning to Tehran, she gave two concerts in Tehran singing songs of William Daniel, the Assyrian author, thinker, composer and poet. She also gave another concert of classical music with late Carmen Osorio at piano.

In 1994 she performed twice in San Jose and Turlock. In 2001 she gave an interview to Suroyo T.V. (Bahro Productions) while introducing William Daniel through singing songs. She took part in the gathering of the European Assyrians in Cologne, where again she became the “Braqala” of William Daniel.

In Tehran she helped many young Assyrians to improve their singing abilities by giving lessons at home. Lorraine now resides in San Jose and she prepares herself for future performances.
Posted by AASA-MN at 8:01 AM