Artist depicts Gilgamesh in Her Painting

Juliet Moradian has been a loyal contributor to Mesopotamian Night arts auction. This year she is presenting a painting on Gilgamesh celebrating the creation of the first opera in Assyrian: Gilgamesh. 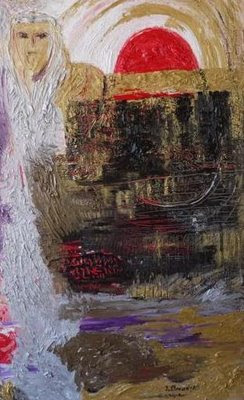 About the artist: Juliet Moradian 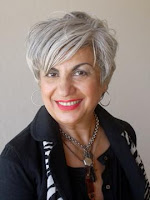 Juliet Moradian was born in Tehran, Iran, immigrated to America with her family in 1963, and settled in Yonkers, New York. In sixth grade it was discovered that she had a natural talent for the arts. She returned to Iran to attend the Art High School in Tehran, but was never fully content there. She needed to explore new horizons and see more of the world.

In a trip back to New York she took courses at the Art Student’s league and visited galleries; she wanted to soak up the culture of the city. Later she took courses at the French Beaux art in Paris and additional courses in fashion design in London. Finally she attended the Academy of Arts at the University of Tehran where she absorbed the quintessence of Persian culture and art that was being taught along with the modern art of Europe.

She identifies her artwork and her art teachings as a follower of the Bauhaus school. A School founded in 1919 in the small town Weimar, Germany. The School was founded as an Architecture school but later it developed itself into the most profound school of Arts ever and was being taught almost in all academies of fine arts throughout the world. One of the most important manifest of this school was to bring all the fine arts under one roof and teach them or learn them as a package for they are all connected and have more substances in common than conflicts.

Juliet counts on many avid collectors of her art. But because of her passion for her people her professional goal is to be successful with her own community as well. To this end she moved to California in 1998. Since then she has tried with various degrees of success to bring art to the Assyrian community and to bring the Assyrian community to art, by teaching art, exhibiting art within the community, and developed paintings with Assyrian motifs.

Therefore it has been an honor for her and a privilege to be invited by the Assyrian Aid Society to provide a painting with an Assyrian motif. And there is no greater motif than the epic poems of Gilgamesh.

“Art without social, political, or philosophical motif is just an expensive craft,” she says.

In Gilgamesh the philosophical motif is how God Shamash couldn’t tolerate the brutal ways of the man Gilgamesh and forces him to surrender to Godlike behavior and nobility.

“I find it so amazing to create an image of a historic half man half God out of the first epic written on cuneiforms in Mesopotamia. Gilgamesh who saw the deep and surrendered to God Shamash.”