In the following article, Obelit Yadgar summarizes better than everyone else, the vision behind our Mesopotamian Night project. We are glad, he is back contributing to what he has passion for: promoting Assyrian Performing Arts. 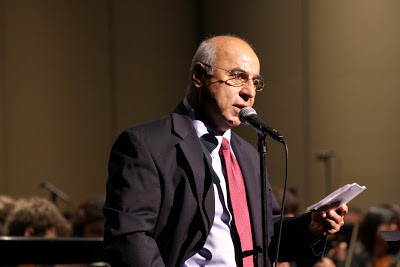 
I have been part of Mesopotamian Night productions, in one way or another, since 2008. For 2008, 2009 and 2010 I was master of ceremonies, as well as writer, program annotator and on-camera interviewer. I flew in from my home in Wisconsin to do the stage work and the interviews. The writing was done at home. With the 2013 production approaching in June, as I plan a series of articles and interviews on the evening, I can’t help but reflect on those years with Mesopotamian Nights.

Assyrian history is rich in art and culture. Visit the world’s finest museums and see our treasures. Yet to my dismay our performing arts suffer painful neglect, especially at a time when opportunity abounds to soar. Look at what other nations do. Feel the dedication to their arts. I wish the Assyrians would realize the wealth of their performing arts and embrace them heart and soul.

For a nation’s soul is in its arts.

It’s bad enough that half the world thinks we’re extinct, but it’s tragic to witness our timid exploration of the Assyrian performing arts.

It’s as if we had none. Sure, our dances are danced at weddings and picnics and our popular songs are sung at various social gatherings. But there is more to Assyrian performing arts than these sweet pleasantries. The potential for great dramas, comedies, operas, light musicals, ballets and literary readings lies parched in an arid wasteland of neglect.

We have the playwrights, the composers, the choreographers, the dancers and the poets. Look around you. They’re everywhere. Yet we taste meager servings. A few bones tossed out. How sad. What is needed is the willing heart and the generous purse to light up the Assyrian performance stage, for we can dazzle the world audience just as well as anybody. Once upon a time we dazzled the known world.

That is what drew me to Mesopotamian Nights when asked, in 2008, to serve as master of ceremonies and writer. For me, it was a dream come true to experience an actual Assyrian stage production and then imagine the potential for some really big stuff. Despite suffering growing pains, artistically and in general, the productions made an indelible impression on the audience. Assyrians were witnessing something rare.

I remember the Assyrian National Anthem “Roomrama” gave me goose bumps, in the 2008 production. William Daniel’s song “Nineveh” performed by soprano Lorraine Davis was a treat. And I feasted on the excerpts from the Assyrian operas Gilgamesh and Inanna, composed by John Craton. In the second half the pop singers Walter Aziz and Ashur Betargis, in the masterful hands of Music Director Pierre Noghli, rocked the evening to a memorable close.

In 2009, John Craton’s opera Gilgamesh returned with another excerpt. Excerpts from the opera Qateeni by Michel Bosc, which was based on the Epic of Qateeni Gabbara by the noted Assyrian composer William Daniel, added to the operatic feast. Also by Bosc, Assyryt Suite was a tasty orchestration of 20 piano pieces by another renowned Assyrian composer Paulus Khofri.

The Overture from the Oratorio Gilgamesh by Samuel Khangaldy stole the show. I was not familiar with the Rev. Khangaldy’s music. What an introduction to this fine Assyrian composer. The gorgeous overture, some 15 minutes or so in length, uses long and luscious lines in the tradition of the great symphonic poems by Tchaikovsky, Smetana, Liszt and Sibelius.

Pop singers Lida Lawando and Emanouel Bet-Younan closed the second half with a string of Assyrian songs, from soulful to bouncy.

The 2010, Mesopotamian Nights served a rollicking Broadway-style Assyrian production. Oh, it was a joyous evening, with a big orchestra, singers and dancers. Michel Bosc’s Assyryt Suite made a return. Then something new by the French composer: the cantata Ninos and Sermiramis, a love story set to poems by Yosip Bet Yosip.

In the second half, Walter Aziz and musician and arranger Edwin Elieh collaborated on a memorable song and dance review. Sherene Melania, artistic director and choreographer for the Presidio Dance Theatre, spiked the show with her exciting choreography and corps of dancers in dazzling Assyrian costumes.

Perched on a stool off stage, beaming like a child in a candy store, I could not but think that Ashurbanipal would have been pleased. Indeed, it was a memorable evening.

Yes, the talent is there — and it’s rich. So is the subject matter. All that is needed is the willing spirit to help it soar. Mesopotamian Nights does it with its annual productions that celebrate the feast of the Assyrian Performing arts. Here is to many more years.