With a great pleasure and honor we introduce our beloved singer George Gindo to perform the songs of the legendary Edward Yousif "King Biba" at the upcoming 6th Annual Mesopotamian Night concert on June 15, 2013 at California Theatre in San Jose, CA. 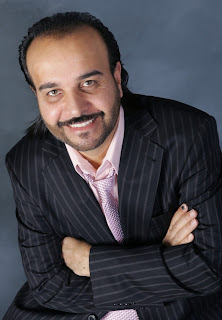 Born in Kirkuk, Iraq to parent Nanno Gindo and Elishwa Youkhana, has five sisters and two brothers. Married to Susan Gindo and have three children Ariana, Taymen and Assyria.

As a youngster, he was inspired by his oldest brother Ninos who was an artist and a musician. Soon he was singing at gathering of friends and relatives who were very supportive of his abilities. Like many Assyrians, George left his birth country and migrated to the United States in 1979. He settled in Chicago, IL and made it his home since. In mid 1980s, he started singing at friends and relatives private parties joining other singers.

The turning point in George’s career happened in 1989 when he formed the Chemou Band and started to perform at the Assyrian American Association Club indoor picnics and parties. Shortly thereafter, George started to get the attention and praise from the Assyrian community and his songs became popular among Assyrian music fans nationwide.

George first album (cassette) “Khoolma” was released in 1992 containing seven original songs and one instrumental. Also, a video clip of the album hit song (kha b’ Nissan) was created by the Assyrian Around the World network. Two albums (CDs) were followed, “George Gindo 2003” and “Khoba Khaya” in 2006.  There were also three video clips produced from the 2006 album, in which one of them was filmed in our homeland, Bet Nahrain. Currently, George is finalizing his fourth album and it's due to be released in spring 2013 along with selected video clips. 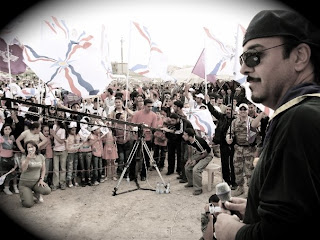 The most cherished experience for George happened in 2007, when he was asked to join a group of very talented Assyrian singers and musicians to participate in Akitu: The Assyrian-Babylonian New Year celebration held in the homeland Bet Nahrain. Returning to the land of our ancestries after 28 years and performing in front of our people was a memory to last a lifetime. It was astounding to witness the accomplishments of our people back home even with all the struggles. To be able to brace their roots deep in their land was truly extraordinary; especially with all the obstacles in their way. They kept the persistence and moving forward. Most of those accomplishments were possible because of the support that they received from the Assyrian Aid Society abroad. That was what George heard from many community leaders and ordinary people.

George doesn't consider singing a business, but more as a message to the present and future generations. Nevertheless, we all need to appreciate our songs and to value its art. As many would agree, nations are regarded in many ways by the level of music they pile.

“As long as my nation inspires me and appreciate the talent that the all mighty has given me I will continue to sing. Thank you Lord.”

Posted by Sargon Alkurge at 3:52 AM