The least we can say is that the "cultural stimulus" effect of the Mesopotamian Night project is working within the community. In 2010 concert we will be introducing the musical talent of George Somi, a college student with big ambitions including being an Assyrian classical music composer, by premiering excerpts from his orchestral suite called "The Assyrian Legecy". Below is George's story in his own words. 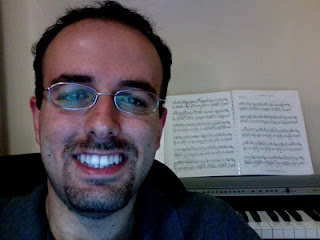 I was born on November 13, 1988 in Chicago. The story of how I got into music started when I was 3 years old. My mother tells me that I watched somebody play "Happy Birthday" on the piano and after he got off, I took the seat and played back the song. She consequently put me into piano lessons when I was seven and I've been playing ever since.

In the summer of 1999, I moved to the Phoenix, AZ area, where many more musical opportunities presented themselves to me. I joined the school band playing the tenor saxophone when I was 10. From then on, music became an integral part of who I was. I quickly learned the saxophone, and my band director offered me private lessons to introduce me to jazz. A year later, I became part of the Peoria Honor Jazz Band playing lead tenor. I fell in love with jazz in that year and have been playing it ever since. Today, I play lead tenor in Yavapai College's Big Band II in Prescott, AZ. I also serve as the church organist for the St. George Ancient Church of the East in Phoenix.

As for composing, that started quite early. I had always had musical ideas bouncing around in my mind; I can even remember contemplating melodies at the age of 5. However, I never really thought of putting them down on paper. That changed when I turned 12; I composed my first song, "Taking Action", written for a typical school concert band (about 60 people). My band director then told me about a state competition of young composers, which I subsequently participated in. My song was 1 of 12 picked for performance at the Phoenix Civic Plaza.

My compositions continued through my first year at high school and each added a more complex element as I went along. In my sophomore year of high school, I decided that it was time that I devote my energies to a major project. At the same moment, I thought about how sparse any symphonic music was within the Assyrian realm. I knew of very few prominent Assyrian classical musicians and I didn't know of any major orchestral works by Assyrians. I felt an obligation to perform some sort of duty to my people, something that would stand out. Thus, I meshed the two ideas together. Major musical project plus duty to my people equals a major symphonic work following the story of the Assyrian people. I began writing the first notes in my sophomore year and penned the last notes in the first half of my senior year.

I am now pursuing a bachelor's degree in aerospace engineering at Embry-Riddle Aeronautical University in Prescott, AZ. You may ask what the a person with such a passion for music is doing pursuing an engineering degree. I get that a lot. The answer to that question is that I have a second passion, a passion for space. I have always been intrigued by it and find myself looking at the stars very frequently. I also have a passion for the maths and sciences, hence, the engineering part of the picture. I was fortunate enough to get the opportunity of interning at the NASA Ames Research Center in Moffett Field, CA in the fall of 2009, an invaluable experience. Now, I am back at school, a junior of aerospace engineering, and I'm very excited to finish up my degree!

I have two dreams. One is to be able to stand and direct a symphony orchestra in a concert. The other is to go to space and ultimately, walk on Mars.