A Tribute to A Legent: Sooren Alexander 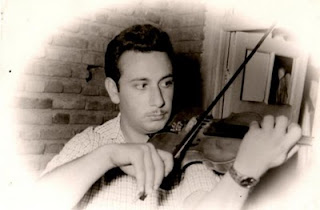 Late Sooren Alexander perhaps is one of the most influential individuals in modern Assyrian folkloric and pop music. The Mesopotamian Night project in 2010 will celebrate the music of Sooren. With the permission of his daughter, Athena Alexander Betsamo, we have been given access to an unpublished book prepared by Rabi Essarhadoun Khofri, and Mr. Bellos Nisan. Thanks to tireless efforts of Mr. Noray Betbaba who sent us a copy of this book titled "A Selection of the Folkloric Dance Music of Assyrians of Iran and Other Creations of Sooren Alexander". This book contains sixteen pieces of folkloric dances and songs by Sooren Alexander. These pieces will be arranged and orchestrated for performance at Mesopotamian Nigh 2010 and upcoming other AAS-A events.

"
One of the artists of this new generation was Sooren Alexander, a talented local musician who was gifted in the creation of new, folkloric pieces for the violin and accordion. Known as one of the best contemporary Assyrian musicians since the beginning of his compositional career in 1949, his many pieces were based on pure folk music. His numerous Assyrian songs and dance compositions are filled with his feelings about his own experiences, things both seen and heard. His pieces take the listener on a journey through suspense and sweet dreams, anxiety and love. Sooren's creation are well-known throughout the Iranian artistic world, not only in Iranian Radio and Television productions, but also Iranians worldwide, and there are few who do not know of Sooren and his art.
"
Posted by AASA-MN at 9:17 PM