It is a pleasure to announce that Ms. Carol Lancaster Mingus the director of MJC Department of Television and Film will be producing the DVD for the Mesopotamian Night 2009 concert. Ms. Mingus was present at the event with her large camera crew and recorded the event from different angles and conducted quite a large selection of interviews. 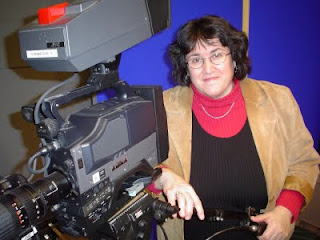 Currently an instructor of Television and Film Production at Modesto Junior College, Carol Lancaster Mingus received her BA Degree in Radio and Television from the University of Arizona. Prior to joining the faculty in 1993, Carol served as Senior Coordinating Producer for local programming at KVIE in Sacramento and as a producer-director at KUAT in Tucson, Arizona. In her tenure with PBS she produced and directed a variety local programming and won several awards for her documentaries, promotional campaigns and was nominated for a regional Emmy Award for directing.

Over the last sixteen years Carol has guided the MJC Department of Television and Film into becoming one of the premiere Media Arts Departments in the state. The program offers intense “hands-on” training, and the opportunity to become a staff member of a professional production company. Plankwalker Studios is a full service, on-campus, student run, video production company and under her direction several of their commissioned projects have won national awards for their clients.

Her teaching position combined with the state-of-the-art facilities at Modesto Junior College has enabled Carol to share with her students, her talents and her absolute passion for producing and directing television and film projects. Most recently Carol produced and directed a documentary, San Francisco’s Broken Promise which was accepted into three California Film Festivals and has been featured on KTEH-TV in San Jose and on Free Speech TV on Cable.

The latest project for Carol Lancaster Mingus and Plankwalker Studios is "Mesopotamian Night 2009"!